In previous posts we've seen how to run drogue-cloud, how to use LoRaWAN in rust, and the introduction of the drogue-device. In this post, we'll tie this together and walk through the process of running LoRa on drogue-device, sending data to drogue-cloud.

Let's have a quick look at the different technologies we will be focusing on in this post.

LoRa is a low power long range wireless protocol that operates in a lower frequency spectrum than WiFi, ZigBee and Bluetooth. This enables IoT use cases not possible with the shorter range technologies. We've previously seen how you can use LoRa with Rust. In this post, LoRa is only used as an example of one way to communicate from a drogue-device to drouge-cloud. We aim to support both WiFi, LoRa, NB-IoT and other wireless standards for working with drogue-cloud.

Drogue Device is an Actor framework for writing embedded applications in Rust. The advantage of using drogue-device is that you can represent sensors and peripherals as independent components (actors) and wire them together in your application, as a way to apply good software engineering principles in embedded programming.

In many cases you might want to connect your devices to some central system. A system that may receive data, hand out commands and configuration to devices, orchestrate firmware updates and lots more. That is Drogue Cloud, our backend system based on Kubernetes, Knative, and Cloud Events.

Drogue Cloud provides you with tools for device authentication and authorization, different protocol endpoints, message normalization, persistence, device management, and a few more things. The idea is that, on the cloud side, you can focus on processing the data that your devices provide you.

Drogue-device contains device drivers for different boards and sensors. Drivers follow a common set of patterns that makes it easier to write new drivers. Device drivers can be written in different ways, but the common approach is to implement the following:

A driver is exposed as a Package that can be configured during application initialization. The Package exposes an Actor that can be used to interact with the driver.

For more information on writing drivers, see the driver guide.

There are also drivers for eS-WiFi and SPI based on embedded_hal.

To send a message, the LoRa driver address is used:

Under the hood this will send a message to the LoRa driver which will initiate the transfer. Using Rust Async, the result can be await'ed, which in this case is required to ensure that the reference is kept valid for the lifetime of the request.

The full example of drogue-device can be found here. You'll see that most of the application consists of defining the drivers to use, and wiring them together in the device event handling.

Telemetry to the cloud

When the device sends data to the cloud, it actually shouts out its message to the local airspace using the LoRa protocol. If there is a LoRa gateway nearby, then it will take that message and forward that to its backend system.

In our case, we chose to use The Things Network (TTN), just because we had a bit of experience with them. And, because they have a great and affordable indoor gateway and great support for many different types of gateways, which is great for testing.

Once the message reached the backend system of TTN, it will get forwarded to our Drogue Cloud sandbox instance using the HTTP integration of TTN. The following diagram shows the message flow in a bit more detail:

Don't be scared! Yes, this is a bit more complex than just sending your message to the cloud using WiFi. Let's take a look at the different components in there.

Why don't we directly consume from TTN? One of the core features of Drogue Cloud is to integrate with all kinds of IoT related communication partners. Just assume you want to add an additional network like Sigfox later on. Our you want to add some of your own gateways? Or add some devices using MQTT? In all those cases, you would need to create some kind of data normalization layer yourself. If that is a dedicated layer, or a growing if/else block in your code, doesn't matter. Drogue cloud provides that layer for you, and lets your application consume all those messages using standardized CloudEvents.

Another question is: why don't we directly send to the Drogue Cloud instance? First, we will always need some kind of gateway, to bridge between LoRaWAN and the TCP/IP world. We cloud create our own gateway stack, receive messages and forward them directly to our endpoints. On the other hand, that would mean that we would need to do the LoRa specific processing, like detecting duplicates, ourselves. Yes, some open source software exists for that as well. But, in any case, we would need that functionality. For the sake of simplicity, we simply re-use an existing service for this.

Still, if you are interested in creating a direct integration, we would be happy to help you in the process.

Setting up a Drogue Cloud instance should be as easy as:

However, for connecting to The Things Network, you will need to have a publicly accessible instance, as the HTTP integration of TTN will call into your instance. Setting up a publicly hosted version of Drogue Cloud might be a bit more effort, and maybe something that you would like to avoid in the beginning.

As we face the same issue, we have set up a public sandbox for playing around and testing. You are welcome to use it as well, if you promise not to use it in production. It is an in-development version of Drogue Cloud, and it doesn't protect your data in any way! On the other side, it is super easy to get started:

Applications provide a way to isolate devices. Follow the instructions on the "getting started" page to create a new application, and a new device. As application IDs must be unique, and this is a shared instance, be sure to pick a fresh ID. For device IDs, you are free to pick whatever you want, as long as it is unique for your application.

The default command will use the password hey-rodney. Be warned: Don't put in your usual password here, as for now, everyone else will be able to see it.

In the TTN console, you can create an integration using several out of the box components. For drogue-cloud, we can use the generic HTTP Integration, which allows you to configure TTN to pass on telemetry data to a HTTP endpoint, in our case the Drogue IoT sandbox. The authorization header contains the HTTP basic auth credentials for our device. (NOTE: This is not really a good way of doing things, writing a proper integration that did not require storing credentials in TTN would be better). 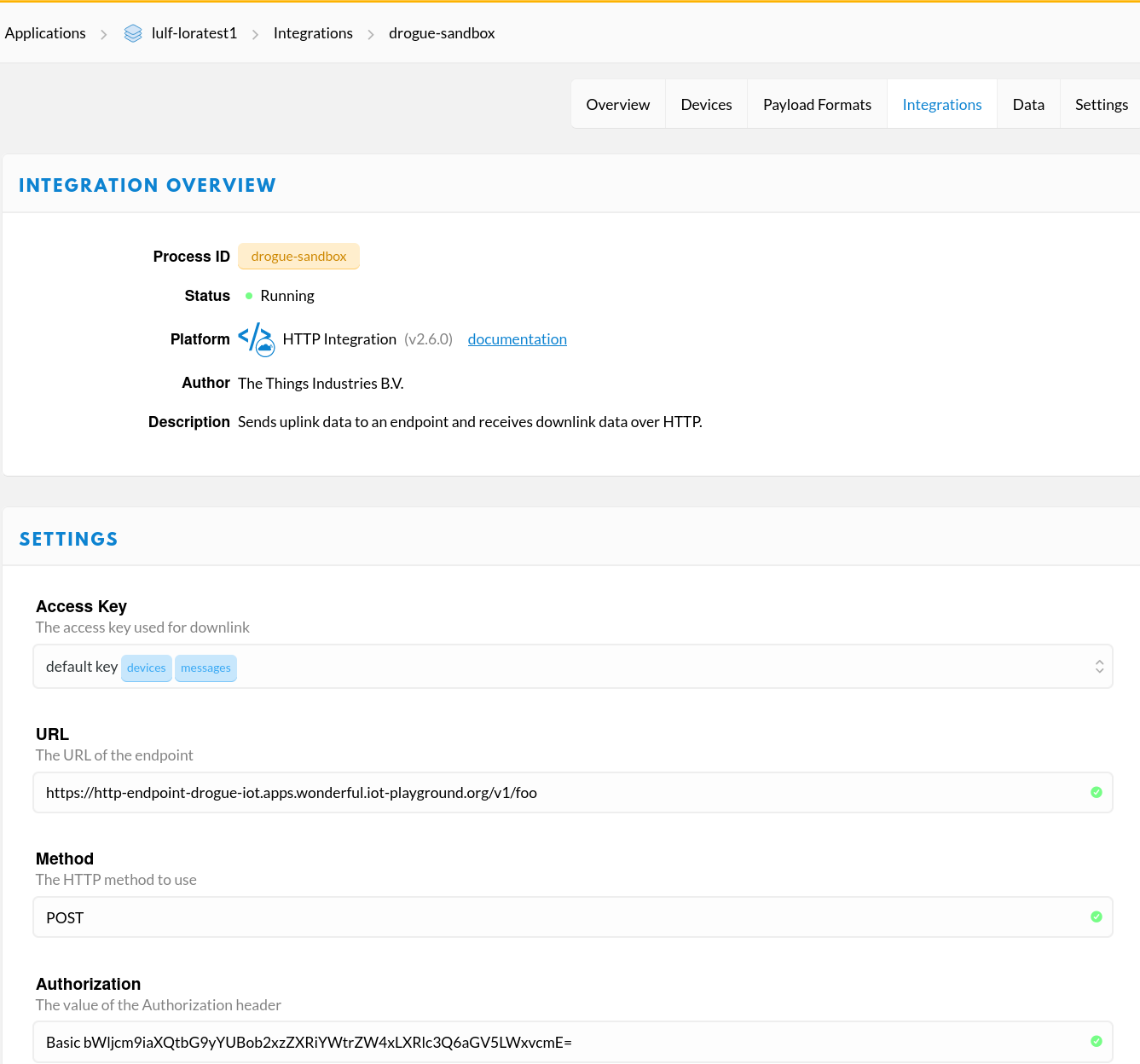 Once the integration is set up, we are ready to send some data.

To verify that the end to end is working, Open the Drogue Cloud Sandbox in your browser and go to the 'Spy' page, where you can watch all telemetry being sent (filter by your application id to avoid too much traffic).

To send the data, we flash the device using cargo embed. This will open the debug console for the device, so we can see what's going on:

The example is made for the BBC micro:bit attached to a RAK811 LoRa board over UART. To join the network, we push the A button on the micro:bit. To send data, we push the B button.

Once data is sent, the telemetry should find its way to the drogue console: 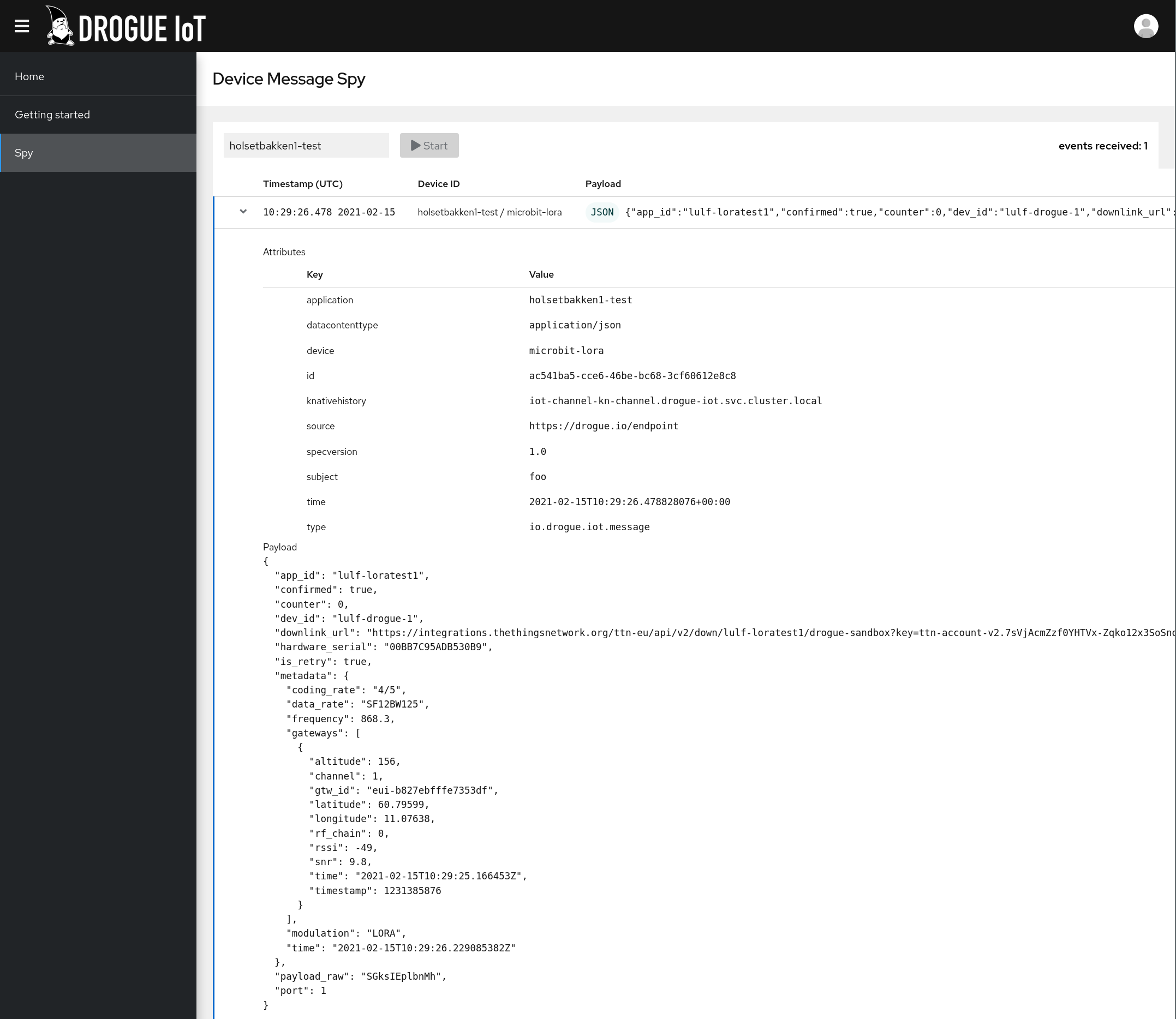 We want to improve the experience of drogue device and drogue cloud even further. Some ideas:

Please reach out to us if you have any further ideas or would like to work on the drogue project.